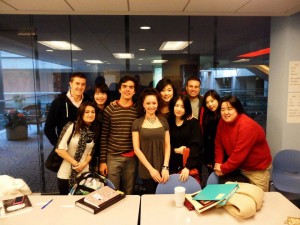 This session at ILSC – San Francisco we featured a creative writing class called Creative English “Story-Telling.”  The always amazing instructor of this class, Annika, had her students write many kinds of stories including fairy tales.  Here are two very funny and impressive stories from her class. Enjoy!

Once upon a time in a faraway kingdom there was a castle with a mysterious but famous name, ILSC.  The owners of the castle were a very kind and friendly family.  They were all sidekicks to each other and nothing could destroy them as a family.  They were constantly making new friends from all over the world as they were inviting them to visit their beautiful castle and stay there as long as they wished.  The secret to their popularity was that they gave valuable gifts to each of their visitors – they gave them knowledge – knowledge of the English language – the most desirable gift of their times.  There was one detail though – their guests were supposed to earn their gift through hard work and diligence.  Many other kingdoms were trying to gain as much respect and fame as ILSC but none of them succeeded.  So ILSC became the most powerful of them all.  Obviously they had a lot of enemies but they were too weak to do any harm to ILSC.  It was the finest example of virtue.

Everything was going very well until one terrible day.  Something very unexpected happened to the castle.  It was severely attacked by a huge relentless monster named Laziness.  Every single visitor of the castle was under his influence – they were tired, sleepy, helpless, always late and had no energy whatsoever!  This continued for weeks and the owners of ILSC were very close to giving up and accepting their defeat.  They already knew that the castle was enchanted and cursed by their enemies who envied them so much.  They needed to find out the way to save their precious home, family and friends.  But they had no idea how.

One of the family members named Axly remembered that she had a wonderful sidekick who had saved her many times when she was a little girl – Polar Bear!  It took him five days and five nights to arrive and when he finally arrived he figured out right away what he needed to do.  He wrote an incantation and gathered all the guests and family members together in a room.  They stood in a circle, joined hands and repeated 3 times:

Let us live our own way!”

Then each member of the group got a task from the cunning Polar Bear – to wash the floor, clean the windows, throw away the trash, and so on.  Monster Laziness could not bear looking at such a large united team doing hard work and BANG! – exploded in the air.  There was a burst of applause and there was a huge party afterwards, and never ever again did the castle meet any enemies!

The Legend of Annika the Awesome

Once upon a time, there was an amazing teacher at ILSC named Annika the awesome.  She turned the classroom into an English school yard!  Everyday she strolled to work in her big brown beaver skin boots.  She has the most dangerous juggling trick with markers.  Her eloquent singing voice could be heard across the Financial District in San Francisco.  Every student flocked to her classroom door at the start of a new session.  She was so super energetic that sparks flew off her body.  All the other teachers wanted to be her and secretly dreamed of defeating her.  She haunted every student’s dream with idioms!  Walgreens was in her debt for all her purchases and treats for her students.  One day the cunning elf named Erin from room #114 challenged her to a duel of Taboo.  The great Annika was fatally wounded by Erin’s skills.  Her classroom was altered to immortalize her talent by allowing everyone who passes by to look into her classroom and see her famous white board where is wrote the English language!