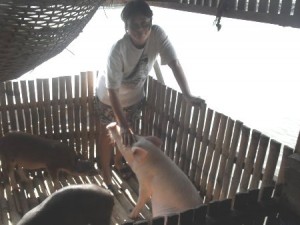 The International Business English class at ILSC Montreal has been very busy with their project this session.

KIVA was founded in 2005 and has local offices in 54 countries all over the world, and has helped over 400,000 people by providing them with over $100 million in loans! The great thing about KIVA is that the money raised is given directly to the small business owners as loans, which they then pay back over a period of time. This means that one donation, once it’s paid back, can be used again for other borrowers in the future – the gift that keeps on giving!

We chose to support a 48-year old lady from the called Letecia Moywela. She is a mother of 6, and her business is pig farming.

The daily income for 65% of the population of the Philippines is less than $2 per day. Pig farming is the most important part of the Philippines’ agricultural sector. This sector has great potential to help the lives of rural people, over 40% of whom live in poverty. So this donation will make a real difference to Letecia’s life.

We received an email from KIVA letting us know that the local office in the Philippines received our money safely and have given the full $300 loan to Letecia – great news!

Thank you to everyone that donated and/or bought our cookies – you helped us make a real difference in someone’s life!