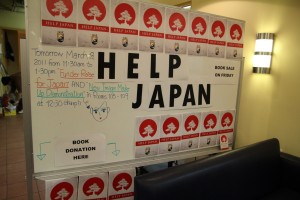 As a global language school, ILSC teaches students from around the world, and Japanese students generally make up between 10-15% of the student body.  Being away from home during the earthquake and tsunami crisis has been a challenge for these students. Many of them have gone through the stress of wondering what is going on back home, and what they can do to help.  On March 16th, ILSC started a fundraising campaign to contribute to the Japan relief efforts, and give students, staff and teachers the opportunity to get involved.  The global “Help Japan” campaign raised $15,357 over a two-week period which is being matched by ILSC, for a total Red Cross contribution of $30,715.

ILSC’s campaign was first sparked by three Japanese students at ILSC-Vancouver, who began fundraising in public spaces around the city.  All three students have friends, family or neighbours who have been affected by the quake and really wanted to reach out and help, despite their distance from home.  They engaged other students at the school to help them fundraise, and later combined efforts with a larger ILSC campaign that took place across 7 global campuses located in Vancouver, Toronto, Montréal, New Delhi, San Francisco, Brisbane and Sydney. 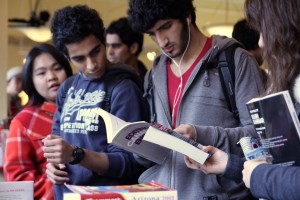 Students find some great reads at the Help Japan Booksale

ILSC’s schools raised money and cultural awareness through a series of raffles, book and bake sales, Japanese dinners, and Japanese cultural events that took place over a two week span.  Many local businesses and homestay families generously donated prizes, books and baking towards the campaign efforts, making it a community-wide initiative.

At ILSC, global awareness goes hand-in-hand with the language learning experience.  The “Help Japan” campaign allowed everyone at ILSC to put that global awareness into action through collaborative fundraising initiatives that will hopefully go a long way to provide support for Japan.

Did you participate in the “Help Japan” campaign, or others like it?  Tell us about your experience.