ILSC’s spirit of reaching out into our local and global communities continues to drive a number of great CSR initiatives around our campuses.  Our most recent CSR efforts included:

Go Hashimoto fundraiser – In October, students and staff at ILSC-Sydney raised money for Japanese international student Go Hashimoto, who slipped off an apartment balcony in Manly, Sydney.  He fell 4 floors and sustained very serious injuries and will probably never walk again.  ILSC-Sydney held a number of fun events and raised a total of $751.80 to support Go’s mounting medical costs.  Events included a food sale, a giant table-tennis competition, and a raffle to win a FREE skydive donated by one of ILSC’s activity partners.  ILSC-Australia matched the fundraising amount and Go Hashimoto received $1500.00 in total. 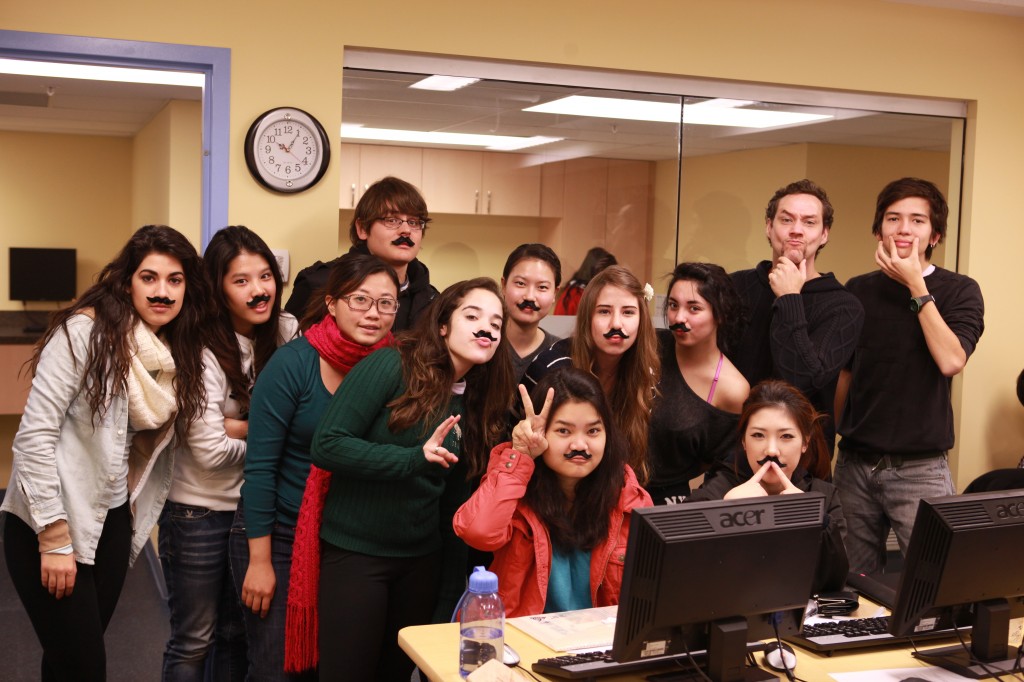 Movember –  ILSC-Vancouver, ILSC-Toronto, and ILSC-Brisbane all got involved in growing some Mo(ustache)s to raise awareness and funds for men’s health issues in November.  This fun month-long initiative encouraged some spectacular moustache styles, lots of fun events at ILSC campuses, and raised more than $2,868 towards men’s health initiatives.

Zombie walk for brain cancer – Zombie walks have seen the undead springing up across many cities around the world in recent years. In Brisbane, this event was focused on fun, and on raising awareness about brain cancer.  ILSC-Brisbane students had a great time participating in this scary event! 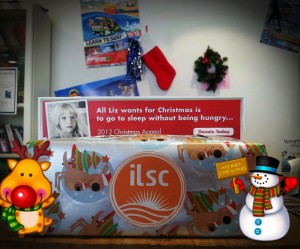 Sharing the holiday spirit with those in need – ILSC-Toronto, ILSC-Vancouver, ILSC-New Delhi and ILSC-Montréal, and ILSC-Brisbane participated in local initiatives to help out children, families, and those suffering from illness in their communities during the holiday season.  ILSC-Toronto collected 102 gifts and $545 for CHUM radio station’s Christmas Wish program, providing toys for kids. ILSC-Vancouver’s Internship department raised money to support 3 families with gifts and food through the Salvation Army’s Adopt a Family program, and ILSC-Brisbane also supported their local Salvation Army, ILSC-New Delhi collected toys for children at the NGO Harmony House, and ILSC-Montréal collected donations for Foundation d’Aide Directe SIDA Montréal to provide food hampers to people living with HIV/AIDS in the Montréal area.

Hockey Equipment Drive for Ladakh, India – People from the ILSC community in Vancouver, Toronto, and Montréal donated their used hockey equipment towards a hockey program in Ladakh, India.  Together, ILSC Canada schools donated a grand total of 18 hockey bags filled with used equipment, which will help get local youth and adults involved in sport during the cold and challenging winter months in this Mountainous region.   ILSC-Sydney also supported getting the equipment to India for the tournament. 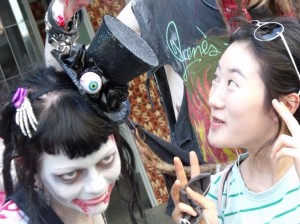 Share the Warmth/partageons l’espoir – In October, ILSC-Montréal’s Global Social Issues class collected food donations from ILSC-students, then brought them to a local food bank and offered their time to help support the organization.  The project provided an opportunity to practise their language skills while doing something positive and inspiring in the local community. Read more in an earlier blog post.

Learn to Earn Program – Many of ILSC schools have done fundraising this past year for the Learn to Earn program offered at ILSC-New Delhi.  Most recently, ILSC-San Francisco held a fundraiser that included a bake sale, and a silent auction in which the staff auctioned off their various skills, talents and time.  Students got to bid on things like a guitar lesson, ice-cream making lesson, hiking, touring around San Francisco, language lessons, and more.  The school raised a total of $360 which supported learn to earn student, Manju to participate in the program. Want to know more about Learn to Earn? Check out ILSC-New Delhi’s website. 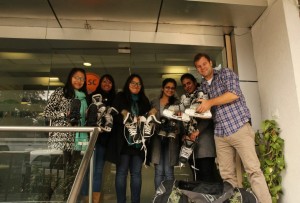 Showing off some of the hockey equipment collected for Ladakh

Covenant House Donations – Greystone College has an ongoing donation box set up at the campus to collect goods to donate to Covenant House, a Vancouver non-profit that supports street involved youth.  On December 20, ILSC-Vancouver also did a fun “Pajama Day” event to raise money for Covenant house.  The day was also geared to raise awareness about street involved youth, and to think about just how long the longest nights of the year must feel for those who live on the street.

CSR in the classroom – The values and ideas of Corporate Social Responsibility are also continually being explored within ILSC classrooms, and particularly in classes like Green Leadership and Global Social Issues.  By virtue of being an international school, with students from diverse cultural backgrounds, ILSC students get to explore different ways of thinking, and learn how to build bridges across cultural divides.

Check out photos, and updates about our many CSR initiatives on ILSC’s Facebook Page.