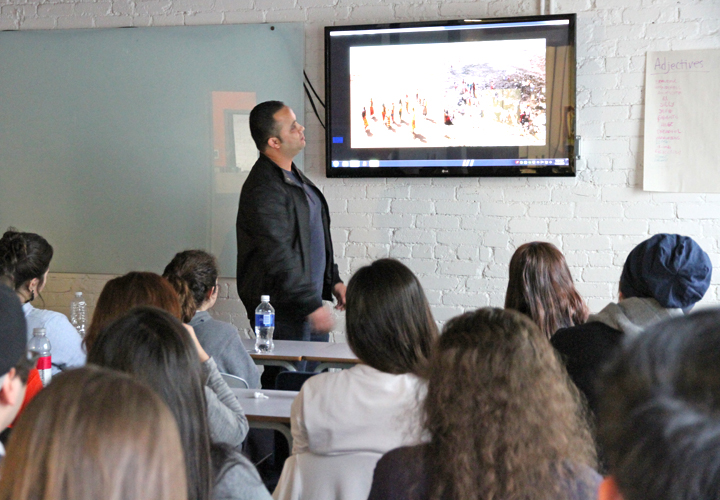 It’s Earth Month at ILSC!  This past Friday at ILSC-Vancouver, I had the privilege to stop in and check out part of a very special presentation on the environmental impacts of water consumption.  One of our students, Abdaraouf Elhadi Alamri, from Libya developed and shared this insightful presentation for Earth Month with some of ILSC’s other classes who came to learn and share their own experiences and knowledge of environmental practices around water use in their home countries.

Abdaraouf touched on a variety of key points around water use, from the effects of desertification and drought, to the negative impacts of plastic bottles on wildlife and the environment.  Students also discussed how bottled water companies impact the local communities, and the lack of clear regulation around water extraction – in most cases, water is taken from communities for free, and may damage local water resources.  And while people may think that they’re buying cleaner better water, often times, bottled water is just the same thing you can get out of the tap.

One thing that struck me in particular was a great slide juxtaposing last year’s viral “Ice-bucket challenge” for ALS fundraising with the image of a boy in a drought stricken country drinking a small amount of water.  This shows the huge disparity in our relationships with water around the world.  For people in drought stricken countries, the concept of dumping buckets of water over your head and being so wasteful with such a precious resource is just completely absurd and upsetting; but for those of us who are so disconnected from droughts and water restrictions, it takes an image like this one to really make us stop and think about our water usage and wastage.

After the talk, I had a chance to chat with Abdaraouf about what got him interested in this topic and what motivated him to give the presentation.  While Abdaraouf already knew a lot about C02 and global warming before he came to ILSC, last month, when he took the Green Leadership class he said “it changed my perspective.  I now know a lot of what I was doing was wrong, like not recycling.”  The class also opened his eyes in other unexpected ways, for example, he says “here in Canada, my idea was this was a developing country – Canada came up with ideas like the Kyoto Protocol, which is great, but then [in 2012] refused to re-sign that agreement.”

In his research for his presentation on water, Abdaraouf learned even more.  In particular, he gained a deeper knowledge about the plastics industry and its impacts – where plastic products start, where they end up back in the environment, and how they can harm wildlife and disrupt eco-systems.  As he says “I started asking, can we do something about it – I’m a Doctor so I care about human life, but I have to care about other parts of life too.  Why do we do these things to animals in our environment?”

Abdaraouf was really transformed by the knowledge that he learned in his Green Leadership class, and through his own further research.  He believes that every small action can make a difference, and that there are others like him who could be taking wrong actions through lack of knowledge, so sharing knowledge can be a game changer for the planet.  I think he inspired a lot of other students with his talk, and he certainly inspired me when I had a chance to chat with him.