“For members of ILSC and dozens of others from around the world, we also come for an entirely different reason every January: to promote community development and cultural exchange between Canada and the Ladakhi community, through our shared love of ice hockey” – Mark Branov

As our plane departed the chaos of Delhi on an early morning in January and headed north, the landscape began to change dramatically. Vast urban areas gave way to flat, verdant farmland, then to foothills, then small mountains. The mountains starting getting taller, and green turned to grey, then grey turned to pure white: the vastness and profound beauty of the Himalayas. 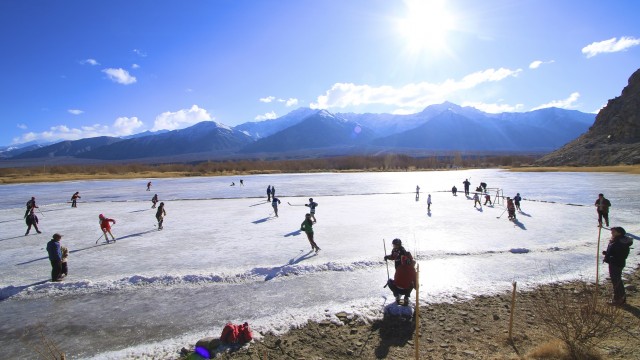 Outdoor hockey at a local pond near Leh, Ladakh

Each January, for a few lucky members of the ILSC team, this short flight has become a kind of pilgrimage. Our destination: one of most remote regions of Jammu & Kashmir State, near the borders of Pakistan and China, in the heart of the world’s largest mountain range. For many years, travelers have flocked to the town of Leh, in the region of Ladakh, to experience its tranquil beauty, its ancient temples and its breathtaking scenery. For members of ILSC and dozens of others from around the world, we also come for an entirely different reason every January: to promote community development and cultural exchange between Canada and the Ladakhi community, through our shared love of ice hockey. 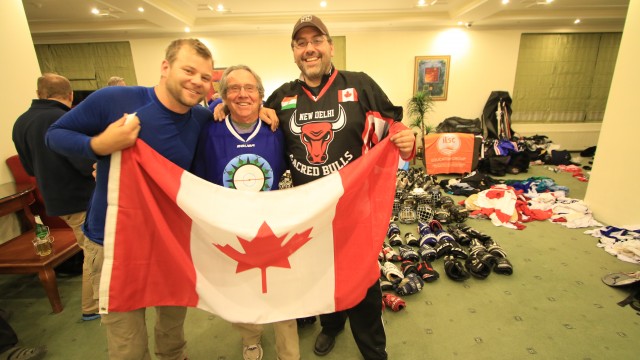 Back in the early part of the 20th century, ice hockey was first introduced to India in the city of Shimla, the summer capital of the British Raj. It started making its way up the mountain trails from Himachal Pradesh to Ladakh in the 1970s, as Indian army officers stationed there needed a winter activity to keep fit. The sport would soon become wildly popular across the Ladakhi community, despite a total lack of equipment. People used to use field hockey sticks and army boots fitted with homemade blades instead of proper skates.

Back in 2001, the Canadian High Commission in New Delhi organized its own team, the Sacred Bulls, in hopes of promoting the budding hockey culture of Ladakh. The team’s visits would eventually evolve into the highest altitude hockey tournament in the world, where skaters compete at approximately 11,500 feet above sea level. Since those early days, the tournament has grown in size exponentially, largely thanks to the help of Adam Sherlip and his team of coaches and volunteers at The Hockey Foundation, along with various sponsors such as the CHC, SunLife Financial and ILSC. 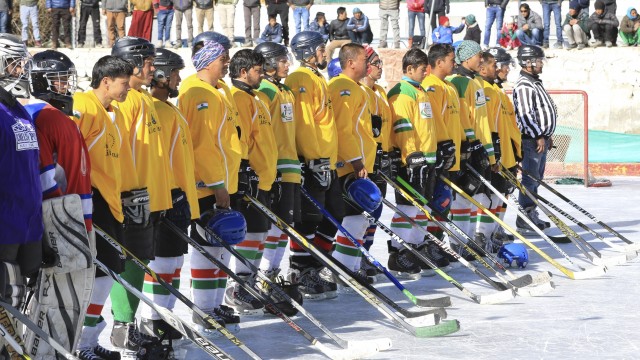 One form of sponsorship ILSC specializes in is contacting partners and homestay families across Canada to collect good quality, used hockey equipment, organizing its transport to India, and donating it to the children of Leh. ILSC plans to keep building a strong connection with the people of Leh, where we hope to expand our community development focus into other areas which are equally close to our hearts. 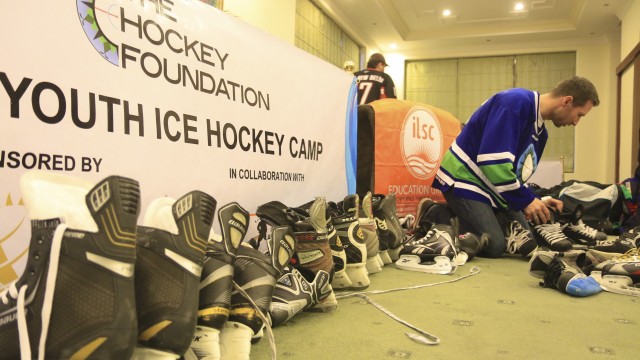 Just some of the donated equipment

Jason Flaming, Director of ILSC-Sydney, became involved in this project back in January 2012, while he was Director of ILSC-New Delhi.  He went back to Canada that first year and began enlisting the help of colleagues and family in gathering hockey equipment for the people of Ladakh:

“I had been involved in many CSR projects in the past, but there was always something very special about this one.  As a young boy growing up in Guelph, Ontario, my winters were always steeped in ice hockey – the thrill of getting a new stick, the sound of skates cutting through the ice, the pure joy of playing on frozen ponds until long after the sun went down.  What struck me most when I was high up in those mountains, being so far away from home, was that I could see these same feelings of joy, happiness and fun in the faces of the local kids.

I remember helping one young Ladakhi girl tie up her skates that first year and she was beaming a smile from ear to ear while I was tightening the laces.  Once finished, she shot me another toothy smile, said, “thank you,” and skated off.  I think it was that moment that made me realize that I wanted to become more involved.  And with the vast resources and talent at ILSC, we’ve built this project into an integral part of our CSR mission.”

Check out the video of the 2015 tournament: